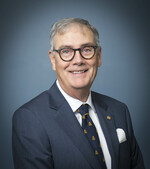 Bill Kennedy has been General Counsel to the Natural Resources Conservation Board (NRCB) since the organization’s beginnings in 1991. Bill also served as an acting member of the Board from 1998 until 2010.

Bill has over 30 years experience in both private and public law practice. Prior to accepting his position with the NRCB he worked in private practice, with a focus on corporate, commercial and oil and gas law. As one of the first professional employees of the Natural Resources Conservation Board, Bill was involved with all aspects of establishing and managing the organization, including drafting the statutes and regulations that govern its practices and procedures.

During his tenure with the NRCB he has also served as counsel to several Canadian Environmental Assessment Act review panels, and has provided legal services to the Energy Resources Conservation Board (now the Alberta Energy Regulator) and the Alberta Utilities Commission.