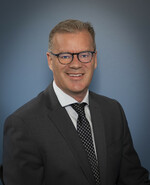 Sean joined the Natural Resources Conservation Board (NRCB) as chief executive officer on February 7, 2022. He has been seconded from the Government of Alberta for a two-year period.

As CEO, Sean is responsible for delivering the functions that regulate Alberta’s confined livestock feeding sector under the Agricultural Operation Practices Act (AOPA), and for the development of policies and procedures that support these functions. Sean is also responsible for the NRCB’s corporate services and science and technology capacity, to ensure the Board is well-supported to carry out its authorities under AOPA, and under the Natural Resources Conservation Board Act.

Sean brings many years of experience to the NRCB from a long and accomplished career with the Alberta government. His roles within what is now known as Alberta Agriculture, Forestry and Rural Economic Development (AFRED) have included branch head of economics and later executive director of the Economics and Competitiveness Division, executive director of the Environmental Stewardship Division, as well as time as acting assistant deputy minister for the Primary Agriculture Division. He was involved in the creation of the former Alberta Livestock and Meat Agency where he served as executive director of industry investments. Sean was also engaged in the development of the agriculture component of the climate change strategy for the Government of Alberta, the former Farm Stewardship Centre in Lethbridge, and the Canadian Roundtable for Sustainable Beef. In his most recent role with the Government of Alberta Sean worked with Indigenous communities and the oil and gas sector in his role as executive director of the Oil Sands Monitoring Program, one of the largest environmental monitoring programs in the world.

Sean has a Master of Science degree from the University of Alberta in agriculture economics.